Meghan Markle may have held back on details about the much-sensationalized pre-wedding fight that she and Kate Middleton had over flower girl dresses during her Oprah interview, but Prince Harry is now filling in the blanks. Page Six shared his personal recount of the situation from his forthcoming memoir Spare, which explains exactly why Meghan ended up in tears after having a conversation with Kate just four days before the couple’s wedding.

The dispute was over Kate’s daughter Princess Charlotte’s flower girl dress fitting. The Daily Mail alleged that Harry wrote that Meghan said Kate, who had delivered Prince Louis just one month before the wedding, had “baby brain,” which contributed to what happened.

According to Page Six, Harry wrote that Kate texted Meghan the week of the wedding about there being a “problem” with Charlotte’s dress, made by then-Givenchy creative director Clare Waight Keller, who also created Meghan’s wedding dress.

The girls’ “French haute couture dresses [were] hand-sewn based solely on [the bridesmaids’] measurements,” Harry wrote, so the fact that they needed tweaks wasn’t exactly a surprise. 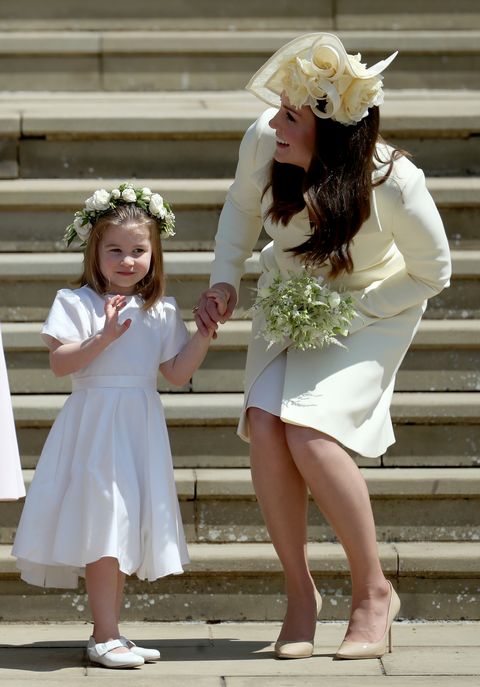 Meghan replied to Kate and told her to bring Charlotte to the palace where a tailor “was waiting to perform alterations for all six of the bridesmaids,” Page Six wrote that Harry shared. Harry claimed this response was “not sufficient” for Kate, who asked for time to talk with Meghan herself.

During their talk, Kate allegedly told Meghan that Charlotte’s dress was “too big, long and baggy,” and Charlotte “burst into tears when she tried it on.” Meghan repeated again that Kate should take Charlotte to the tailor in the palace. Kate then responded that all the bridesmaid dresses needed to be “completely remade,” and that she had consulted her own wedding dress designer, Alexander McQueen’s Sarah Burton, about it. The wedding was only four days away at this point.

Ultimately, Kate took Charlotte to the tailor, but the “altercation” she had with Meghan really hurt the bride-to-be, Harry wrote. He shared he found Meghan crying “on the floor” after. Like Meghan herself revealed earlier to Oprah, Kate apologized and brought flowers and a card to Meghan the next day.

In her 2021 Oprah interview, Meghan discussed how hard it was for her to see the tabloids twist this story into her making Kate cry. Meghan’s details are consistent with what Harry himself shared in his memoir, albeit purposely more vague to protect Kate’s privacy.

Meghan told Oprah: “The narrative with Kate, which didn’t happen, was really, really difficult and something that I think, that’s when everything changed, really.”

“No. [I didn’t make Kate cry],” she continued. “No, no, the reverse happened. And I don’t say that to be disparaging to anyone, because it was a really hard week of the wedding, and she was upset about something, but she owned it, and she apologized, and she brought me flowers and a note apologizing and she did what I would do if I knew that I hurt someone. To just take accountability for it.

“What was shocking was, what was that, six, seven months after our wedding, the reverse of that would be out in the world [the story suggesting Meghan made Kate cry]. I would’ve never wanted that to come out about her ever even though it had happened. I protected that from ever being out in the world. A few days before the wedding, she was upset about something pertaining—yes, the issue was correct about flower girl dresses, and it made me cry and it really hurt my feelings, and I thought in the context of everything else that was going on in those days leading to the wedding that it didn’t make sense to not be just doing what everyone else was doing, which was try to be supportive, knowing what was going on with my dad and whatnot.

“There wasn’t a confrontation, and I actually think it’s…I don’t think it’s fair to her to get into the details of that because she apologized and I’ve forgiven her,” Meghan admitted. “What was hard to get over was being blamed for something that not only I didn’t do but that happened to me and the people that were a part of my wedding going to my comms team, saying, ‘I know this didn’t happen. I don’t have to tell them what actually happened, but I can at least go on the record saying she didn’t make her cry.’” Everyone in the institution knew it wasn’t true. I’m not sharing that piece about Kate in any way to be disparaging to her. I think it’s really important for people to understand the truth, but also I think a lot of it that was fed into by the media. Look, I would hope that she would’ve wanted that corrected. And maybe in the same way that the Palace wouldn’t let anybody else negate it, they wouldn’t let her, because she’s a good person, and I think so much of what I have seen play out was this idea of polarity where if you love me you don’t have to hate her, and if you love her, you don’t need to hate me.”