On Friday night, Travis Scott was performing in Miami, and he was joined by his girlfriend Kylie Jenner for a little PDA in between sets. The performance was hosted by Wayne and Cynthia Boich on Miami Beach, where many celebrities are gathered this weekend for Art Basel. The international art fair is always a party scene in addition to an artistic explosion. 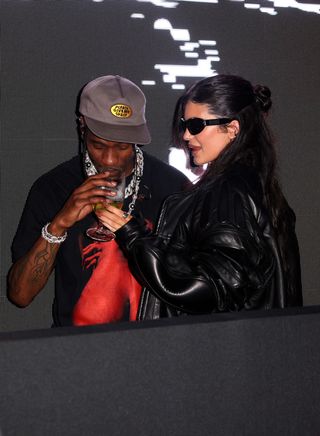 In some adorable photos, Jenner and Scott were seen embracing and sharing the same cup. Jenner had her hair up in a half bun, and was wearing an oversized jacket and a pair of black sunglasses. In one hand she held a glass they each sipped from and in the other was a mini black handbag. She leaned into whisper to Scott before giving him a hug. 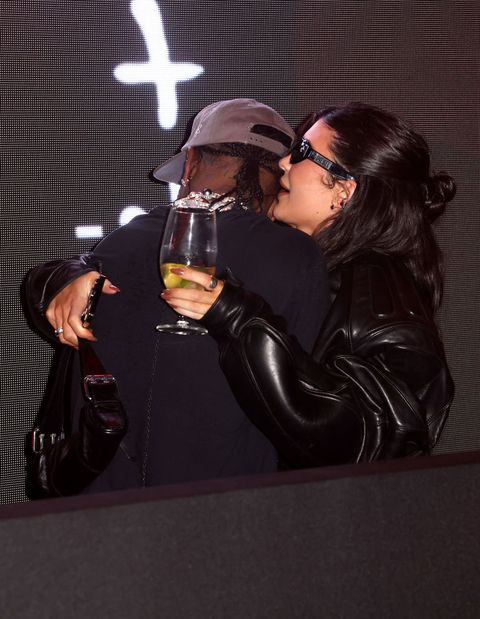 Scott was wearing a black t-shirt printed with a red design, a gray baseball cap, and several thick silver chains. He and rapper 50 Cent performed that evening for the crowd, which included Serena Williams, Hailey Bieber, and Jenner’s sisters, Kim and Khloé Kardashian.

Jenner and Scott share two children, their four-year-old Stormi Webster, and a son born earlier this year who was first introduced to the world as “Wolf.” The couple have since said the name doesn’t quite fit him and they’ve decided on something else that they’re keeping to themselves for now. The pair were first romantically linked in 2017, and they were off-and-on in the years since, but have been going strong for a while now.

Before this event, Jenner was seen at another party at Loren Ridinger’s house with her family members, wearing a black cutout minidress under her jacket and a pair of strappy black heels. Bother her sisters were there as well, making it quite a family weekend.