On Friday night, Hailey Bieber went out to eat in Miami at Papi Steak dressed in dark green. The Bottega Veneta midi dress featured a low scoop neck, halter straps, and was covered in tiny winking sequins. It hugged Bieber’s curves in a sinuous line as she stepped past photographers, revealing her naked back.

She paired the dress with silver and black heels, and carried a matching bag by the same designer, a green Mini Jodie handbag. Her other accessories included a heavy silver necklace and large matching bracelets, and she let her hair down her back, wearing her signature no makeup-makeup look.

Later, she attended the Wayne and Cynthia Boich’s Art Basel Party with friend David Grutman, where both 50 Cent and Travis Scott performed for the attending celebrities. 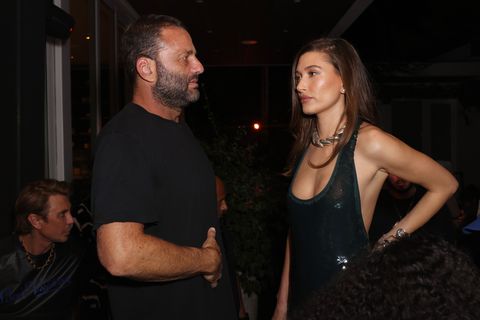 Bieber gave a more detailed look at her dress on Instagram, posing for the camera to show off the sequins catching the light. She joked she’d be sleeping “until Christmas” after this weekend in the caption.

In a reel she showed off the dress again, and sent her love to Miami.

The model recently used her Instagram Stories to clarify that she has been experiencing some health issues, and to put rumors of a pregnancy to rest. Bieber has had recurring cysts on her ovaries, which causes swelling in her abdomen. She shared a photo of her distended stomach.

Over the image, she wrote, “I have a cyst on my ovary the size of an apple. I don’t have endometriosis or PCOS but I have gotten an ovarian cyst a few times and it’s never fun.”

She added, “Not a baby. It’s painful and achey and makes me feel nauseas and bloated and crampy and emotional.”

In March, Bieber suffered from other health issues, and ended up being hospitalized to deal with a blood clot that caused stroke-like symptoms. Soon after, she had to undergo a heart procedure to close a small hole in the organ. Her health has since largely improved, but she has said she is allowing herself more time to heal.