On Friday night, Jennifer Lopez and Ben Affleck went to see the Hugh Jackman-led production of The Music Man on Broadway together. As the couple left the theater, Affleck was photographed taking Lopez’s hand and wrapping an arm around her in a sweet display of marital affection. The pair just celebrated their first Thanksgiving together as a married couple. 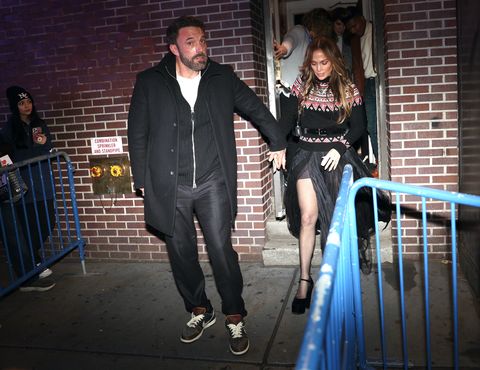 J.Lo was wearing a sheer skirt with a high slit over short dark pants. On top, she was in a patterned black, red, and white sweater, and tall platform pattern-leather heels. Affleck was in black sneakers, dark denim jeans, a black hoodie over a white t-shirt and a black coat. 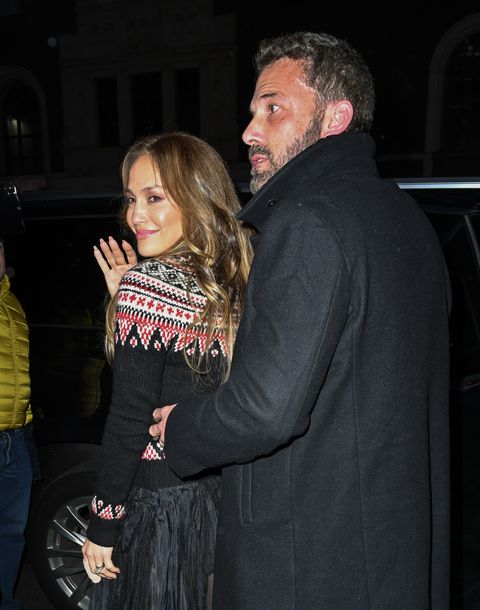 Lopez had her long, highlight-streaked hair down and straight, rosy eye shadow, a dark pink lip, and was wearing small gold earrings. Later that night, Affleck was seen with his stepson Max, one of Lopez’s twins she shares with her ex-husband Marc Anthony. The two grabbed some McDonald’s together. The couple were officially married in Georgia this summer on an estate owned by The Last Duel actor, but they have been working on merging their families since getting back together in 2021. Affleck shares three children with his ex-wife Jennifer Garner, Violet, 16, Seraphina, 13, and Samuel, 10.

They’ve also been looking around for a place to settle down together, and are currently renovating the Lopez’s $28 million home in Bel-Air. They are renting another spot in the neighborhood owned by Australian billionaire James Packer, and Affleck has sold his place in the Pacific Palisades for $28.5 million, Architectural Digest reports. Their visit to new York City seems to be a little holiday vacation, and not a signal that they have decided to switch coasts now that they’re married.