Every Question You Have About Dead to Me’s Heartbreaking Season 3 Finale, Answered

Major spoilers for Dead to Me season 3 ahead.

Netflix’s smash-hit dark comedy Dead to Me may have ended with its jaw-dropping third season, but that doesn’t mean we’re doing okay. As usual, the show left us with as many questions as it did answers, and not everyone is ready to let go of Jen and Judy’s wild friendship just yet.

Discussing that dramatic season 3 finale, creator Liz Feldman tells ELLE.com, “I’m really lucky that I got to write and direct the final episode. Everything you see is exactly as I tend intended you to see it. Those choices are all deliberate and the questions I answer and the questions I don’t answer are all very, very purposeful.”

Here, we ask Feldman to break down Dead to Me‘s heartbreaking finale, and find out if Jen and Judy will ever return to our screens.

Was Judy always going to die? And is she really dead?

After learning that her cancer was terminal, Judy fled to Mexico with Jen. Rather than taking part in a trial for an experimental cancer treatment, Judy wanted to spend her final days on vacation with her bestie. While it was heavily implied that Judy had died, viewers never actually saw Judy’s death. Instead, Jen woke up one morning to find the boat out to sea, and Judy gone.

This dreamy, and somewhat inconclusive, ending was entirely intentional, as Feldman wanted to take “a bit of a more gentle approach to the end for Judy.” As she explains, “Instead of hitting you over the head with it, I let you draw your own conclusions.” While this is far from confirmation that Judy is still alive, it’s clear that Dead to Me’s creator wants fans to decide for themselves what really happened to the character. 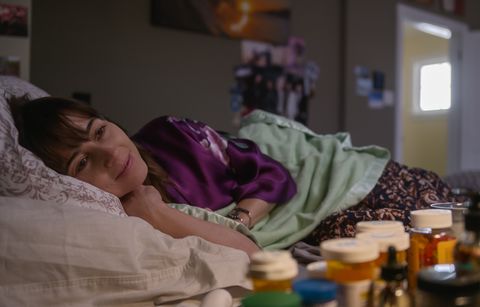 Linda Cardellini as Judy in Dead to Me season 3.

However, the surreal nature of Judy’s disappearance is also meant to represent the grieving process. “I wanted it to feel like the audience was going through their own experience of grief,” Feldman says. “To me, grief often feels like, one day someone you love is there, and then the next day they’re not. You weren’t necessarily there to see what happened or how it ended or how it all went down, but you are left with the feelings. You are then left missing the person.”

Is Jen at peace with her new baby, and does her romantic relationship with Ben work out?

Jen goes through another devastating loss in the season 3 finale with the death of her best friend. Discussing Jen’s ending, Feldman says, “I wanted to deliver Jen into a better place than where we found her in season 1 because of her relationship with Judy, because of all of the gifts that Judy gave her as a person, because of how Judy reminds her of her own humanity.”

However, Jen’s ending isn’t all smooth sailing. In her final scene, Jen is sitting poolside with new daughter Joey, while Ben and her two sons are in the pool. When Ben sits down next to her, Jen seemingly decides to tell him she killed his twin brother, Steve, but the audience is left not knowing how that revelation goes down. “I think that’s what you’re watching in that final scene—Jen has gotten to a place of healing, except there’s still some things hanging over her that have been left unsaid,” Feldman explains. “Obviously she chooses to say one of those things at the final moment there. And it’s up to the audience to decide what that thing is.”

In the final episode of Dead to Me season 3, Ben gets out of prison for “good behavior,” and reunites with Jen. Hanging out by the pool with her sons and their new daughter Joey, he tells her, “I don’t want to sound like a cheeseball, but when I lost Steve, I didn’t think I’d ever be happy again.” He continues, “But when I think about where my life is now, where our life is, it’s like more than I deserved, you know?”

However, Jen experiences déjà vu, and seemingly decides to come clean to Ben about Steve’s death. Jen says, “Ben, I have to tell you something,” but the screen cuts to black before she reveals anything. We don’t know what his reaction is, or whether Ben can forgive Jen for killing his twin brother.

As for whether or not Ben gets a “happy ending,” Feldman says, “I guess that depends on what you think Jen has to tell him.” Clearly, learning that his partner was responsible for his brother’s death would be a lot to take in, but the pair has already handled so much — from Ben injuring Jen while drunk driving to Judy’s untimely death. Whether or not Jen and Ben can make it as a couple may be debatable, but that doesn’t negate Ben’s progress. “I do think that he has gotten to a better place,” she explains. “The goal, like I said, for all the characters, was to bring them some healing and to give them some closure and to try to help them work through these traumas that I set them up to have.” 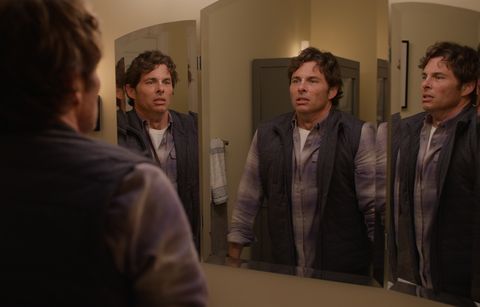 James Marsden as Ben in Dead to Me season 3.

“He’s sober, he’s got this wonderful relationship that he was pining for, he’s got this new life that he’s brought into the world,” Feldman says. “But there are still some things looming over him, some unanswered questions.” While Ben’s life is far from problem-free, Feldman wanted to give the character “a satisfying ending” rather than a straightforward happy one. “There can be some happiness,” she says, “but who’s a hundred percent happy, really?”

As for actor James Marsden, Feldman credits him with making Steve and Ben such distinctive and engaging characters. “The truth is, Ben is a lot more like James, minus the alcoholism. That was my inspiration. I thought, ‘Well, James is nothing like Steve. He’s actually this kind vulnerable sweet man. It’d be really interesting to see him play someone more like that.’” She continues, “The fact that there are twins on the show is really all James’ fault to begin with because that is the product of me just wanting to keep working with him.”

Do Jen’s sons move forward unscathed from this whole saga?

Jen’s sons, Henry and Charlie, have been an important part of Dead to Me since the very beginning, with both kids learning to deal with their father’s death. As for what happens to Henry and Charlie after the events of the finale, Feldman thinks they’re going to be just fine. “There was a lot of conversation that the writers and I had about how much they should know, about what they should find out by the end of the season,” she explains. “But what we decided ultimately is that Jen is a good mother and that she above all wants to protect them. I think her version of protection is omission. They don’t need to know everything. What they don’t know can’t hurt them.”

And what about Judy’s love interest, Michelle?

Viewers were delighted about the return of Judy’s romantic interest, Michelle, played by Natalie Morales. Discussing the decision to bring back Michelle for the final season, Feldman explains, “I wanted to give Judy a little bit of sunshine in this dark moment in her life.” 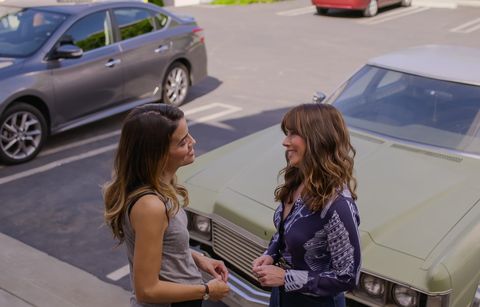 Natalie Morales as Michelle and Linda Cardellini as Judy in Dead to Me season 3.

But for anyone worried about what happens to Michelle after the events of the finale, Feldman says, “I also wanted to show that this doesn’t necessarily need to be a long term relationship, but that people can come in and out of your life at the right time to give you just a little bit of positivity and love when you need it.”

If you were crying while watching the final episode of Dead to Me season 3, you most certainly weren’t the only one. Discussing one of the episode’s most poignant moments, Feldman says, “I decided that the last scene that we should shoot was the scene where Jen and Judy are saying goodbye without saying goodbye.” She continues, “It was so meta because Jen and Judy were saying goodbye, but so were Linda [Cardellini] and Christina [Applegate], and so was I and so was the crew. Pretty much every single take was absolutely beautiful. Every time I yelled, ‘Cut,’ I’m wiping away tears. Everybody else is wiping away tears.”

Evidently, the onscreen connection between Jen and Judy is so believable because Cardellini and Applegate are now extremely close in real life, too. “Linda and Christina are so brilliant in that scene,” Feldman says, “and so raw and real and I think it’s palpable. I think you can feel it.” She continues, “The goodbye should be that difficult, it should be that heart-wrenching. I think that they absolutely knocked it out of the park.”

Is Dead to Me really over? Or could we see these characters again someday?

Yes, season 3 of Dead to Me is the show’s final season, and everyone’s storylines got tied up in the finale, to some degree, giving the audience a pretty satisfying ending (if you can get over that cliffhanger, obviously). However, the show’s creator hasn’t completely closed the door on Jen, Judy, Ben, and Steve just yet. “To me, this is the end of this story, and I will never say never because I’ve been doing this too long,” Feldman says. “I ended the series on an ellipsis instead of a period. Let’s just say I did that for a reason.”

Feldman had a very good reason to end Dead to Me with its third season. “I would rather get to choose that this is the end, rather than keep my fingers crossed that perhaps I could get more seasons,” she explains. “I didn’t want to overstay the welcome. I didn’t want things to get so heightened that you don’t care as much as you do about the characters anymore.” Understandably, Feldman and her team wanted Dead to Me to go out on a high, and to leave fans wanting more.

Regardless of whether or not we ever see Jen and Judy again, Feldman is elated that Dead to Me resonated so well with viewers. “I want to thank all the fans of the show for embracing it the way they have,” she says. “It’s really meant the world to me to hear from people out there who have told me what the show means to them.”