Andrew Morton on His New Book, The Queen, and The Crown Season 5

Andrew Morton regrets little about his bestselling 1992 biography Diana: Her True Story: not the surreptitious manner in which its interviews were conducted; not the warfare it catalyzed between the Prince and Princess of Wales; nor the way it was portrayed in 2022, on the fifth and penultimate season of Peter Morgan’s drama The Crown. He has only two wistful observations: That so many refused to believe his work was authentic when first published, and that he never got to meet with Princess Diana before her death, to express his gratefulness for their work together.

Indeed, he has Diana largely to thank for his worldwide recognition now. In the years since he became famous for his unprecedented royal scoop with the princess, Morgan has marketed himself as the ultimate expert on the monarchy, writing multiple books about Diana; Princess Margaret; Edward VIII’s wife, Wallis Simpson; Meghan Markle; and Prince William and Princess Kate, among others. He’s also proudly swept through the Hollywood circus, penning biographies of Tom Cruise, Angelina Jolie, Monica Lewinsky, and David and Victoria Beckham. Now, he’s releasing his latest about the woman herself: the late Queen Elizabeth II.

Grand Central Publishing scooted up the release date of The Queen: Her Life, originally slotted for 2023, to land shortly after the sovereign’s death in September, and to coincide with the release of The Crown’s latest season. In episode 2 of season 5, Morgan and his cast depict Morton’s breathlessly secretive interviews with Princess Diana, conducted via audio recording with middleman Dr. James Colthurst shuttling tapes to and from Kensington Palace. The resulting biography remains one of the works of which Morton is most proud, in no small part for its unprecedented access. If the wall between the monarchy and its subjects still exists—and Morton argues it does—then at least Diana: Her True Story gave it a thorough throttling. Today, The Queen hardly matches the explosiveness of Her True Story, but, then again, the late Elizabeth Windsor was never much like her firebrand daughter-in-law. She had something different, something quieter and more enigmatic, to offer.

In an interview shortly before The Queen’s publication, Morton spoke with ELLE.com about his new book, his depiction in The Crown, and what he makes of the mysterious “mask” that covers the monarchy to this day.

You’ve made yourself familiar with the royal family over the course of numerous books, but it’s a different beast to try and encapsulate the sovereign herself. How was writing this particular book different from the ones that came before it?

Well, I think the process is different, because the queen is ingrained into your psyche from a very early age. She’s on the stamps, on the money, on the flags. So, as a biographer, you’ve got to step outside yourself, and it takes a while to understand that you are not writing about the official person; you’re just writing about the human being. And that’s what I’ve tried to do, was almost to say, “How would the human being react to this situation? How would a normal, mature, sensible person respond?” And, I suppose, charting the queen’s life: charting her personal journey, from being someone who lived in the world of wooden horses as a kid … and who acceded to this job at a very young age. She was a mother at a young age. She married at a young age. She had this tsunami of sadness and grief to cope with after her father died, but also having to cope with the new job of being CEO of Great Britain, Inc.

It’s that evolution that you see, quite demonstrably, in the twilight of her career; it was also the glowing affirmation of her role as queen.

Tell me about your sources for this book. There’s a lot already out there, both well-documented and—

There’s lots out there, but it’s also a question of building certain things out. So, for example, I went to Malta, because my hunch was that it was one of the happiest times of [the queen’s] life. I went to Scotland to talk to some of the movers and the shakers there, about her life in Scotland. Spoke to people who’ve worked with her, and for her, either on an upstairs capacity or a downstairs capacity. And over the years, in my notes and conversations, with everybody from Diana downwards, everybody’s got a little anecdote, a little story, to tell about the queen.

So were there any particular sources or documents you leaned on more heavily than others?

You write in this new book, albeit briefly, about Diana: Her True Story. One of the things you mention is how much criticism of the book there was after its publication, given that no one knew of Diana’s involvement. Was that frustrating for you at the time?

Well, unbelievably frustrating. From day one, I could have said, “Well, don’t start blaming me. Diana was behind this book. Diana wanted the book published. This is what she had to say.” But, of course, we wanted to give her deniability. So I’ve always said, I felt like one of these fairground boxers, who was taped up, but with one hand tied behind my back. So when the Panorama program came out, where Diana effectively admitted that she was involved in the book, I was absolutely thrilled because I was vindicated. I gained vindication, and then I was treated very differently by the mass media after that. They were far more respectful.

Looking back now, is there anything you would’ve done differently with that book? How do you feel about its profound legacy?

Well, I’m very proud of Diana: Her True Story. People say to me, “Oh, aren’t you the bloke that wrote that book?” My one regret is that I always thought we would meet and chew over the fat, and take a trip down memory lane, but sadly, she died too young, way too young.

Have you watched the new season of The Crown?

Did that episode play out the way you remember it in real life?

Yeah. They hired me as a consultant for episode 2. So the details are authentic. I mean, they say that I asked her about writing the book, but it was the other way around. The dramatic license—I mean, quite frankly, it could have been more dramatic. There were all kinds of incidents that happened, in the sense of being the royal version of All the President’s Men. And I’ve said this already, but I was quite shaken watching Elizabeth Debicki, because her intonation, mannerisms, and gestures…It was like being in the room with Diana, 30 years ago, and it stirred the silt in my own memory. I found it quite moving.

In that episode, The Crown posits this idea that your motivation for writing Her True Story was that you felt Diana was being crushed by the palace, that her voice was lost. Is that accurate? Were those your motivations?

Well, obviously I wanted to write a book about her, the world’s most famous woman. But at the same time, it’s absolutely true that you felt intense sympathy and compassion for her predicament. You could understand her sense of isolation and despair, and that was a great motivating factor.

Was your relationship with your middleman, Dr. Colthurst, one that continued after the book’s publication?

We’re still good friends. I contacted him yesterday, and said, “Watch the Netflix thing,” and, of course, typical James, he doesn’t have Netflix. He’s never watched it.

Well, it’s pretty clear that [Prince] William wants to control the narrative about his life, and they do that by issuing their own pictures of the kids. Think of them as actors on stage. When they’re on stage, they’re very accessible, but off stage, they’re not. 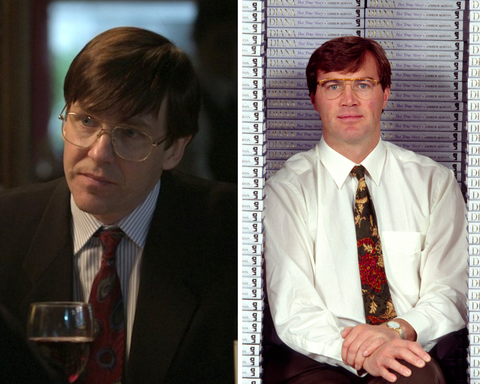 Left: Andrew Steele as Andrew Morton in The Crown season 5. Right: Morton after the publication of Diana: Her True Story.

Do you think that has damaged their reputation, in the eyes of their subjects and of the broader world? Or do you think that’s how they maintain their mystique?

The people who give the monarchy mystique and mystery are ourselves. It’s ourselves, willing the suspension of disbelief. And when you look, globally, at the way monarchies, tribal leaders, chieftains, etc. come about, it’s because there’s a ground swell upwards, not downwards. And this, for me, is the fundamental understanding of the monarchy: It’s ourselves who buy into it, not the other way around.

That leads me to something I’m sure you’re already aware of, which is the recent royalist criticism of The Crown.

The shaking of the pearls.

In your opinion, having watched the show and seen your own depiction within it, do you find it’s a fair depiction? Do you think that it takes too many creative liberties?

What Peter Morgan has successfully done is put another layer of mystery over the monarchy. Because now we have the real royals, and then we have the Morgan royals. And that mystery helps to make the monarchy even more enigmatic, so that it’s even more difficult to get to the heart of who these people are, because you have another layer of misconception and misrepresentation, done in an extremely artistic and clever way.

This is what the critics are all missing: [The Crown] is giving a sense of an alternative monarchy, and the real royals can just get on with their lives, because they’re not being pinned to the wall, as Morgan is doing, in this depiction. Everything about the royals is about what lies behind the mask. What Morgan has done is add another mask.

“This is what the critics are all missing: [The Crown] is giving a sense of an alternative monarchy”

So I would just say to all the critics, he’s done the royal family a favor, because he’s just obscured them even further in way that is, as I say, artistic. Let’s just look at one example: Prince Charles. When you look at Prince Charles’s depiction in The Crown, he comes across as courageous, humane, thoughtful, intelligent, humble, ambitious. He should be shining his sword, King Charles III, ready to give Morgan a peerage.

There’s been a lot of conversation about Dominic West in this season, and how flattering a depiction it is.

And then you get the infomercial about the Prince’s Trust. I mean, Peter, what were you thinking?

We’ve been talking about the mystique of the monarchy, but after writing this book about the Queen, do you feel it’s too early to determine what her legacy will be?

Oh, I think it’s still too early to say. I mean, King Charles is in his honeymoon period. Let’s just see what happens when he grapples with a crisis, and then compare that to the way that the queen handles crises, and we shall see.

I think there’s going to be a lot of compare and contrast, particularly, when it gets round to the coronation. Is he going to go full throttle on being the head of the Church of England, or is he going to do what he said before, which is be the head of all of faith? It’s a tricky question to answer.