When It Comes to Abortion, Don’t Count the South Out

In the Southeastern United States, Roe was dead in spirit for a solid 15-plus years before the Supreme Court issued its edict earlier this year that overturned the landmark ruling and declared that abortion is no longer a constitutional right.

This long and exhaustive winnowing of reproductive rights in the region, in addition to Dobbs, have brought on malaise and despair among locals. It’s affected me, too. I live in the South, and come from generations of Southerners, and my own lucent rage has struggled to maintain its fervor. As a longtime abortion rights reporter, I grow wearier by the day as constant fear hovers overhead, threatening to snuff out what remains of my furious energy.

In the face of such defeat, many folks, exhausted, are concluding that the fight is over, abortion rights lost, and it’s time to pack it up and head to Illinois or whatever haven state is accessible. This is a mistake.

Writing off the South means disregarding the slow, deliberate work done by grassroots organizations that have fought to provide reproductive health care there for decades (in some cases, since the Roe ruling). It also means shrugging off Southerners, many of whom are people of color, who struggle to get basic health care, let alone abortion care, including well-person exams, contraception, STI/STD testing, cervical cancer screenings, prenatal and postnatal care, the list goes on.

Time and time again, it has been proven that abortion access matters in elections all over the country. Despite being told repeatedly by pundits that abortion was not a significant factor in the midterm elections, voters proved that talking point wrong, and nowhere was that more clear than in the Southeast. In Kentucky, a referendum to clarify that “to protect human life,” abortion was not protected in the state’s constitution was defeated. Polling from the Associated Press and the Kaiser Family Foundation confirms that some two-third of voters supporting Sen. Raphael Warnock, who has been unapologetically pro-abortion access in his campaign, did so at least in part because of the outcome of the Dobbs decision. There is power in the South.

The misguided dismissal of the Southeastern U.S. that has arisen from the death of Roe has come from several places. Often it’s from people who live outside the region and write us all off as a bunch of backwoods rednecks who deserve what they get, a sentiment that comes across clearly when we’re asked, “Why don’t you just move?” The same people use the phrase “bless your heart” laden with irony, the only way they know how. (There are, for the record, many ways to use the phrase, and some of them are sincere.) Other times, it comes from the very privileged who live among us here in the South; those who can take comfort in their personal resources, that if they need care, they can afford to get it, even if that means traveling outside of the state where they live and vote and work, without much concern for what their neighbors may have to endure to get medical care.

Writing off the South means disregarding the slow, deliberate work done by grassroots organizations that have fought to provide reproductive health care there for decades.

History offers a lesson here: Whenever complacence has settled over us, it has gone badly for the most vulnerable. As I write in my book, No Choice: The Destruction of Roe v. Wade and the Fight to Protect a Fundamental American Right, white feminists in particular were lulled into a false sense of security after the Roe ruling. When the Hyde Amendment was proposed in 1977 to ban the use of federal funds for abortion care, the effort was largely waved off by the mainstream abortion rights advocates, most of whom were white, upper-middle-class women. They were certain that it would fizzle, given their recent victory at the highest court in the land. (That the law would not affect them may have also been a motivator for their lack of alarm; Henry Hyde was unabashed in the fact that his legislation took aim at poor people.) But the Hyde Amendment did pass, became law, and ever since, has resulted in a loss of abortion access for low-income folks who relied on Medicaid to help pay for care.

I don’t mean to be alarmist, but what I’m getting at is this: It can always get worse, and it is unquestionably better for people to invest in the groups that are working to fill in the gaps wherever they can then to simply write off the South as lost.

Remember, the South raised some of the greatest justice-minded leaders in our nation’s history. Women’s suffrage under the 19th Amendment was cemented in Tennessee. The civil rights movement was born here, fortified by Martin Luther King, Jr., John Lewis, Fannie Lou Hamer, Rosa Parks, Ida B. Wells, and so many more. It lives on perhaps most acutely in voting rights organizing below the Mason-Dixon line. There is a rich labor rights history here, where coal miners have fought for safe working conditions and fair wages for generations, and where Amazon and Starbucks employees are now doing the same. The reproductive justice movement in the South has threads from all of these efforts running through it. Recently, LGBTQ+ leaders here have shown immense bravery in the face of a new wave of transphobic panic, and their determination to continue on has deeply moved me.

The work being done in this region is, and has traditionally been, truly extraordinary. Given the circumstances, nothing less could make much of an impact. In Texas, for example, two local abortion funds: La Frontera Fund in the Rio Grande Valley, and Fund Texas Choice in Austin, among others, have been helping patients who are past six weeks’ gestation travel to clinics outside of the state long before there was a legal precedent for such a restrictive ban. They experienced the fallout of a post-Dobbs reality nearly nine months before it was the law of the land, after Texas banned abortion at six weeks’ gestation. Both groups are Latinx-led, and they helped set a roadmap for other abortion funds in hostile states across the country before the Supreme Court ruling. (While these two funds are not currently directly funding abortion care while they wait for legal clarity from the courts, money donated to them keeps their phone lines open so that they can give advice on safe reproductive care.)

In Tennessee, my home state, abortion funds like Abortion Care Tennessee and Mountain Access Brigade leapt into action after the ruling, knowing there was a finite amount of time before the state’s trigger law took effect and abortion was banned outright. Choices, a full-scale reproductive health care center in Memphis, was also prepared for the moment—they opened a clinic a few hours’ drive north in Carbondale, Illinois, where they can provide abortion care, while continuing to maintain all other reproductive health care in Memphis, where their clientele is largely low-income people of color. (By the way, even in states where abortion is banned, people still need access to reproductive care, and it’s often not easy to come by—abortion stigma infects all aspects of this sort of care.)

No Choice: The Destruction of Roe v. Wade and the Fight to Protect a Fundamental American Right 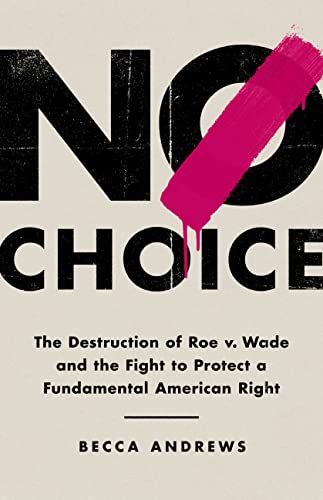 No Choice: The Destruction of Roe v. Wade and the Fight to Protect a Fundamental American Right

In Mississippi, Laurie Bertram Roberts has guided the Mississippi Reproductive Freedom Fund for almost a decade, helping abortion seekers, pregnant people who wish to give birth, and mothers. Recently, they were on the front lines of the water crisis in Jackson, Mississippi, distributing clean water to those in need. In Alabama, the West Alabama Women’s Clinic has also pivoted to emphasize full reproductive care outside of abortion services, including gender affirming care in the college town of Tuscaloosa. Since abortion was banned, they’ve struggled to keep their doors open.

Further south, in Montgomery, Alabama, a city known for its civil rights activism, abortion clinic escorts have long operated out of a house next door to the local clinic. Though the clinic is now closed, the house is not—the crew continues to provide emergency contraception, pregnancy tests, and condoms, in addition to serving as a space where organizers can come and discuss how to meet the needs of their communities.

This is not an exhaustive list of the incredible work that’s being done in the Southern United States. Not by a long shot. The work that is being done in our region to make it a place where all are welcome and cared for keeps me going. I hope the rest of the country can see that good work—and invest in it. Otherwise, things can only get worse for those who are already suffering disproportionately.