Nicola Formichetti Gets Nostalgic With His Latest Gig

Despite being known for his head-turning looks—on himself, as well as clients like Lady Gaga—Nicola Formichetti keeps his camera off on our Zoom call. Though I’m initially disappointed not to witness a sartorial conversation starter via computer screen, he manages to start off just fine. In fact, the super-stylist-slash-designer brings it all the way back to the beginning, when he worked as a fashion editor at the British style magazine Dazed & Confused. “Obviously we had to do all of these photo shoots with low budgets,” he says from Los Angeles, where he relocated a couple of years ago, pre-pandemic, “and Claire’s was the place to go. You had everything there. It was like a magical toolbox.”

Claire’s, he means, as in the accessories mecca originally established in 1974 which is, for most, perhaps a more familiar ’90s or 2000s nostalgia trip and an early fashion stalwart as the first place we got our ears pierced; visited with friends at the mall on weekends or after school to spend allowances on colorful cosmetics or glittery accessories; and as a gateway to tween and then teenagerdom—finally being able to claim our emerging identities through (questionable) hair mascara and affordable fashion jewelry.

For Formichetti, it’s also his latest gig: as creative director in residence.

One of Formichetti’s first campaigns for Claire’s, titled “Get Pierced.”

The brand has undergone a transformation over the past two years in a bid to diversify and expand its retail business, and among a series of new initiatives already introduced—such as campaign called “Be the Most” and films offering styling tips—officially entered the metaverse last month. ShimmerVille is an immersive Claire’s world operating within the Roblox platform, and comes complete with a mall to go shopping in. You can also accessorize your avatar, take care of pets, build and decorate houses, have jobs, and earn digital currency within it. There are plans to extend the idea into IRL concepts in the future, too.

“I love doing something unexpected,” says Formichetti of his new role, “and this is for sure one of those projects.” Growing up in Japan and starting his fashion career in London, he recalls how Claire’s was always “such a big thing.”

“Claire’s is rooted in everyone’s memory—and a childhood memory,” he says, before sharing that on a recent visit there, he found himself being transported back to his own. “So when we started talking about it, I’m like, ‘Oh my God, Claire’s!’ Of course. Of course Claire’s, right?! What a strange…but [it] makes complete sense, me and them together.”

He’s not wrong. It’s the perfect surprise fit to an already acclaimed and iconoclastic CV. 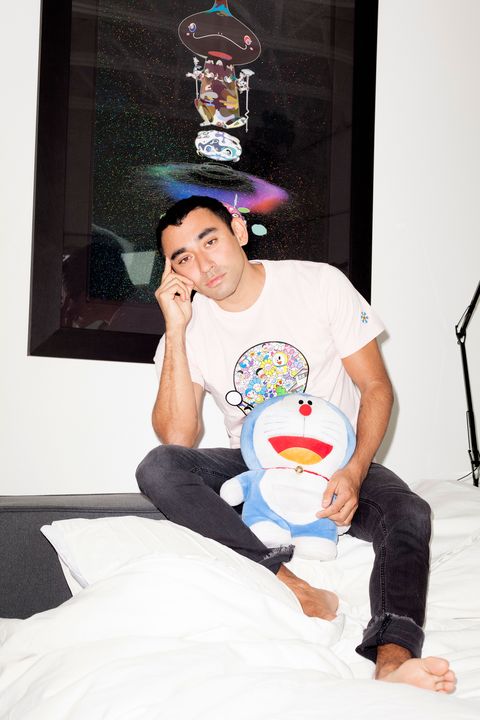 In case you need a refresher, Formichetti is one of those hybrid creatives—agile but authentic, with something of a renaissance man approach—whose Midas touch can run a wide gamut of jobs: buyer, stylist, headline-grabbing fashion director (he was responsible for Gaga’s “meat dress” moment at the 2010 MTV Awards, for example), and creative director for both high fashion and popular commercial labels. He does it all: editorial and brands. 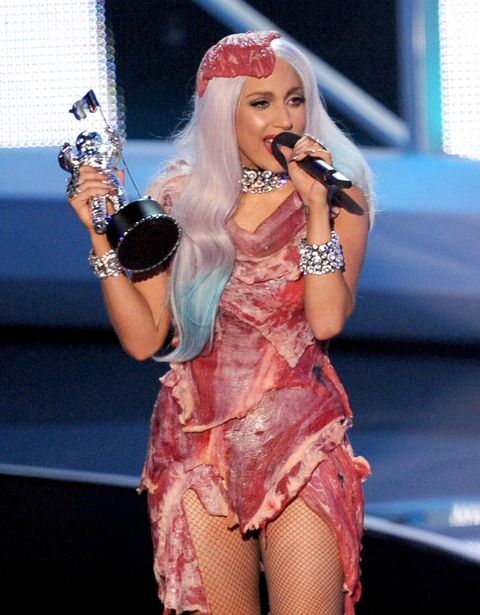 “I just knew that I wanted to do something fun,” he says of his career path, “and I go with my gut feelings, always. And I always believe everything happens for a reason, who you meet, one thing leads to another. I’m never like, ‘I want to take over the world.’” But growing up, Formichetti says he was inspired by people, such as photographers and designers, who had a vision and could translate that visually to create their own worlds. That that was something he knew he wanted to be part of.

He also always admired people who were themselves. “Because when I grew up, I had to almost hide myself,” Formichetti recalls. “I wasn’t comfortable with who I was, and I couldn’t express fully using fashion or hair cuts or accessories or whatever. I always had to blend in to different places. I was an Italian boy living in Japan, and a Japanese boy living in Italy. At the same time, I wanted to stand out and be myself, so I always admired people like that; I always have a soft spot for people who are different.”

Born in Japan, Formichetti grew up in both Tokyo and Rome, and came to London at the age of 19. He worked as a buyer and, later, art director at a fashion store in Soho called The Pinneal Eye, which brought him to the attention of the London fashion scene, and in particular, Dazed & Confused (now Dazed). In 2005, he was appointed fashion editor at the magazine, and also nabbed projects with publications like V, V Man, Another, Another Man, and Arena Homme. He became Dazed & Confused’s creative director in 2008, as well as the fashion director of Vogue Hommes Japan. At the time, he was also consulting for multiple labels in Europe. 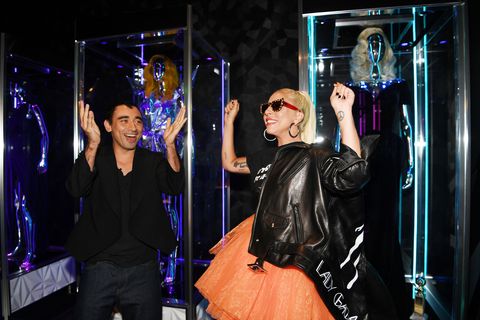 It was on a shoot in 2009 for V Magazine in L.A. that Formichetti met Lady Gaga—for whom he would act as fashion director for the next 13 years. “We haven’t stopped since,” he says. And neither has, he notes, their work ethic, which is always about high creativity. For the past few years, he has worked on her beauty brand, Haus Labs, and when we speak, is fresh from finishing up on her Chromatica Ball tour.

In 2010, alongside working for Uniqlo, Formichetti was appointed creative director of the French fashion house Mugler, which, during his tenure, was rebranded from Thierry Mugler. “When I joined Mugler as creative director, I was just a stylist—it was unheard of [for] a stylist to take over a fashion house. There was a lot [of] ‘Oh my God! Why?’” he says. He stayed for two years before landing at Diesel in 2013 as the brand’s artistic director, and also launching his own brand, Nico Panda, in New York. He departed Diesel in 2017.

“I really see this as not at all like one of my jobs in the past,” he says of the new role at Claire’s. It’s different. “Because I really don’t see Claire’s changing much—it’s already really great. For me, my job is really putting a light towards it, maybe streamlining a little bit, elevating a little bit, modernizing a little bit, kind of like a friend would do. Evolving it together.” Castings, visuals and tech, plus generally making it even more of a global brand are part of his remit. And he’s having a ton of fun doing it.

“Nicola has an appreciation for Claire’s and its role in culture just as it is,” says Kristin Patrick, Claire’s executive vice president and chief marketing officer, who joined in 2021. “The brand has always stood for self-expression, and through his work, he has always encouraged that. We knew he was the one when he got as excited about avocado squishmallows and pizza earrings as we do! He wasn’t looking to change what we do here at Claire’s, but instead to bring his expertise and vision and help us modernize it, so we can continue to resonate with Gen ‘Zalpha’ [Z and Alpha] and find new ways to inspire them.”

Among his immediate initiatives include: the launch of a new content series, C. Studio, which will feature trends and tips as discussed by Formichetti-approved talent such as the nail artist Britney Tokyo, celebrity stylist Florido Basallo, makeup artist Alexandra French, and stylist Anna Trevelyan; a curated team-up with a style publication for an issue specifically aimed at Gen Zalpha, who will also get the chance to play EIC; and the opening of a new Claire’s store in Paris, which will also act as an experiential space for content creation and draw-on phygital activity. 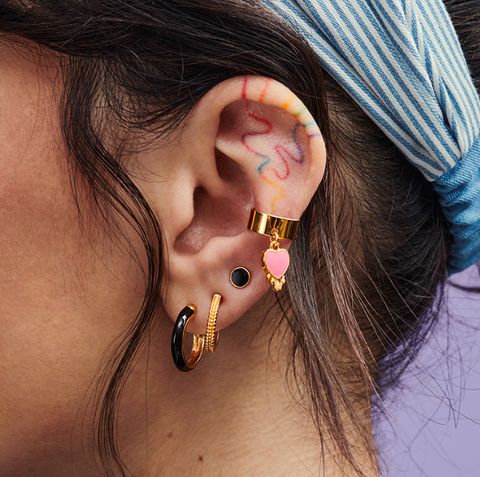 Formichetti himself is no stranger to the metaverse—just take a look at his Instagram feed. “When I discovered Web3 a couple of years ago,” explains the self-confessed futurist, “I went crazy. I just wanted to learn so much about it, because I thought it could be the key, a game changer, especially in the fashion industry.” He was becoming less interested in designing physical things, and felt that the world was changing, as were peoples’ perceptions towards things. “I just felt that this could be a great start, something that could revolutionize everything. So, I’m totally in. Always talking, always doing projects, or anything to do with Web3.” Unsurprisingly, he’s especially excited about Claire’s involvement with it, and how he and the retailer will continue to use it.

“We [Claire’s and him] love creativity and self-expression,” he says of the synergy. “The power of self-expression that’s always something I believe from day one. By not being scared, and using style as your number one tool to express yourself.” Whether or not your Zoom camera is on.

Jessica Bumpus is a writer based in London covering fashion, lifestyle, beauty, and trends.