Jacob Chavez is a serial entrepreneur specializing in land development, i.e., cattle ranching, agriculture, master plan communities, renewable energy, entertainment, and retail brands, one of which he currently founded called Jacob’s Private Select. He takes great pride in Jacob’s Private Select, as it is an organic wellness brand specializing in sleep and overall wellness. What sets Jacob apart from others is his motivation and drive. Jacob has always followed the motto “be the first one in and the last one out.” When an opportunity presents itself, he loves to take risks and give it his all, especially if he knows it could help positively impact another person’s life. To Jacob, God always comes first, and with his guidance, he truly believes the possibilities of success are endless.

Jacob says that it has been a beautiful journey but not a smooth road. “Many challenges have surfaced along the way, but in life, nothing comes easy. I have worked extremely hard to ensure all my businesses have the ultimate success,” says Jacob. Through excellent customer service and highly efficient products, Jacob and his team have been able to maintain a very high standard in all their market spaces. Considering no business is easy to start, they have had to work through their fair share of challenges. Jacob loves what he does and prides himself in making a major impact on these markets and helping a lot of people. Johnny is an actor and filmmaker from Boston, Massachusetts, whose films portray America’s drug epidemic from dark perspectives. A one-time pharmacy robber, these days, he is a celebrated filmmaker, actor, and writer. Johnny’s first opioid tragedy film, Oxy Morons (based on true events), had its release on Netflix, catapulting his career. His second film, Habitual, was executive produced by JiJo Reed at Sugar Studios LA and is currently streaming on TUBI after winning Best Horror Film at the Philadelphia Independent Film Festival. Johnny is currently in production with his episodic series “Dark Is The Night,” now streaming on Scare Network TV, and will feature some of his close influencer circles, such as Jordan Wisely (MTV’s “The Challenge”), Justina Valentine (MTV’s “Wild ’n Out”), and Punahele Soriano (UFC fighter). Johnny is also in pre-production with his documentary “A Dying Breed,” executive produced by Scott Jefferies, best known for “Jersey Shore.”

With over $50,000,000 in high-ticket sales in 2.5 years from cold traffic alone, Chance and his partner Abdul have cracked the direct-paid traffic code. Chance was a broke hippie, and Abdul was bummed out by the status quo. They both knew they were destined for way bigger things. When they met, both had just arrived in the online space and successfully started 7-figure agencies (only back then, there were no funnels and software made for their business model—they built it all from scratch). When they decided to create MM, it was because they felt a deep calling to help others change their lives the way each of them did on their own. Chance and Abdul knew it was possible, and even more so, they knew they could do it better than anyone out there—because they care. Chance and Abdul have been mentoring entrepreneurs since 2015, coaching over 20,000 students from all over the world and creating one of the leading educational platforms on the planet. They have built software for their communities to land clients on autopilot, optimize ads, and automate an entire online business. And this is only the beginning. Michael “Mike” Artime is a go-to expert in the E-commerce space when it comes to email and SMS marketing, helping brands generate millions through his company, Ecom Honey’s data-driven approach.

However, his latest venture, My Following, launched in September of 2022 and steps right into the middle of the music industry. Fresh out the gate, there are whispers from the heart of music city that Michael’s approach could shift the entire music industry and help artists generate new substantial streams of revenue with or without any record labels.

His passion project is being the host of “The Section Podcast,” where he is also working towards the same vision of helping artists and influencers create new revenue streams by having them as guests and providing them with a platform to reach a new audience and build a better relationship with their followers. Jamar Shaw was born in West Philadelphia to a low-income family. After graduating from elementary school in Miami and high school in Alabama, Jamar achieved many milestones in his young and adolescent years, including being on the honor roll, achieving student of the year, and winning his church’s bible bowl competition as the best actor in drama skits. In 2014, he started his career in aviation in Fairbanks, Alaska, for the US Army. He founded a wholesale real estate business and consulting service in 2017 while further pursuing his education for his aircraft and power plant license as an aircraft technician.

During the pandemic, Jamar recorded and made beats for people in his studio apartment in West Philadelphia. In 2020, he started his record label, discovered his sound in music, and became a recording and performing artist. Since 2021, Jamar has been living in Miami Beach as an artist, entrepreneur, and private contractor for aircraft maintenance. He is currently focused on the needs of Jamaica and trading while studying astronomy and physics to meet humanitarian needs, all while building and growing as a musician.
IG: www.instagram.com/vitodagodd Zachary Kern-Schnall, better known as DJ Bander, is a multi-millionaire investor and entrepreneur whose success spans the industries of commercial real estate and the music industry by being a four-time top 100 iTunes charting music producer with over a million streams annually accrued as well as becoming a well-rounded digital marketing and social media expert. Born and raised in Brooklyn, NY, now based in Los Angeles, his private capital management group alone has over $7.5 million under management. His label and marketing firm, Bander Productions, is on track to secure a $10 million valuation by the end of this fiscal year.

Proudly servicing clients of all backgrounds, from artists to corporations, non-profits, podcasts, and others, his efforts have been recognized by Yahoo Finance, Market Watch, and Business Insider. Still only in his 30s, it’s very clear that DJ Bander is a unique type of versatile businessman and talented creative that the modern entrepreneurial world has not seen in quite some time. Gavin Teague was born and raised in North Carolina. He has never been one to follow; instead, he’s always chosen to explore the path less traveled. When Gavin graduated high school, all his friends headed to college, but that didn’t feel like his path. He took the non-traditional route by immersing himself in working and learning from other business owners, and at the age of 18, he was introduced to the world of entrepreneurship. Although the first few years were challenging, Gavin never gave up because he knew the only way to fail was to quit. He focused heavily on leadership and personal development, which has since allowed him to build multiple 7-figure businesses.

Gavin is passionate about showing people how to take control of their lives by breaking out of the matrix and tapping into their own power. He was able to make his first 7 figures before the age of 25 and is enthusiastic about helping others do the same. At just 26 years old, Gavin feels much older when it comes to the knowledge he’s been able to attain through this journey. It excites him to help others create 6 and 7-figure incomes. “Being different is GOOD! I believe in staying true to who you are, practicing gratitude, and wanting the best for everyone around you. We all deserve to win!” says Gavin.

Gavin seeks to work with others who have positive winning attitudes, those who are determined to make an impact and create momentum quickly, and those who are coachable throughout the process. Gavin says 2023 is going to be the biggest year yet for him and the businesses he is actively pursuing. Bryan Davis started his career in hospitality operations and has grown and scaled multiple restaurant concepts in most major cities on the East Coast. His team specializes in providing cash flow and liquidity to small businesses through automated business systems, private equity funds, and leveraged business credit through Grand Rising Financial, his brokerage firm. In partnership with Eric Malysa, he’s the VIP Ambassador for a global disrupting crypto project called Wealth Club Coin, alongside 29 other elite-level internationally-recognized influencers.

In his capacity as a master networker, Bryan collaborates with individuals around the world to develop and implement strategic and diverse wealth-generating strategies. Having built a successful business career as a serial entrepreneur, Bryan is passionate about creating a positive impact and fostering strong relationships with those he does business with. Embracing a servant leadership style by default, Bryan intends to bring a significant economic impact to the communities and businesses he serves in 2023. Clement Connor is living the American dream. He moved to California in 2008 to attend university and has since started multiple successful businesses, including a digital marketing company and a social club with chapters across the country. After only a few years in the USA, Clement began pursuing business ventures to find his path to success. He and his business partners recently founded an artificial intelligence company creating software that will change the music industry entirely. He understands the value of learning from his failures, which has allowed him to focus on the growth of his car club, Fast Lane Drive. Not only does the club act as a networking group for exotic car owners and enthusiasts around the country, but it has also connected people with shared interests in philanthropy and friendship. By next year, Clement plans to take his club international and only plans to grow from there. 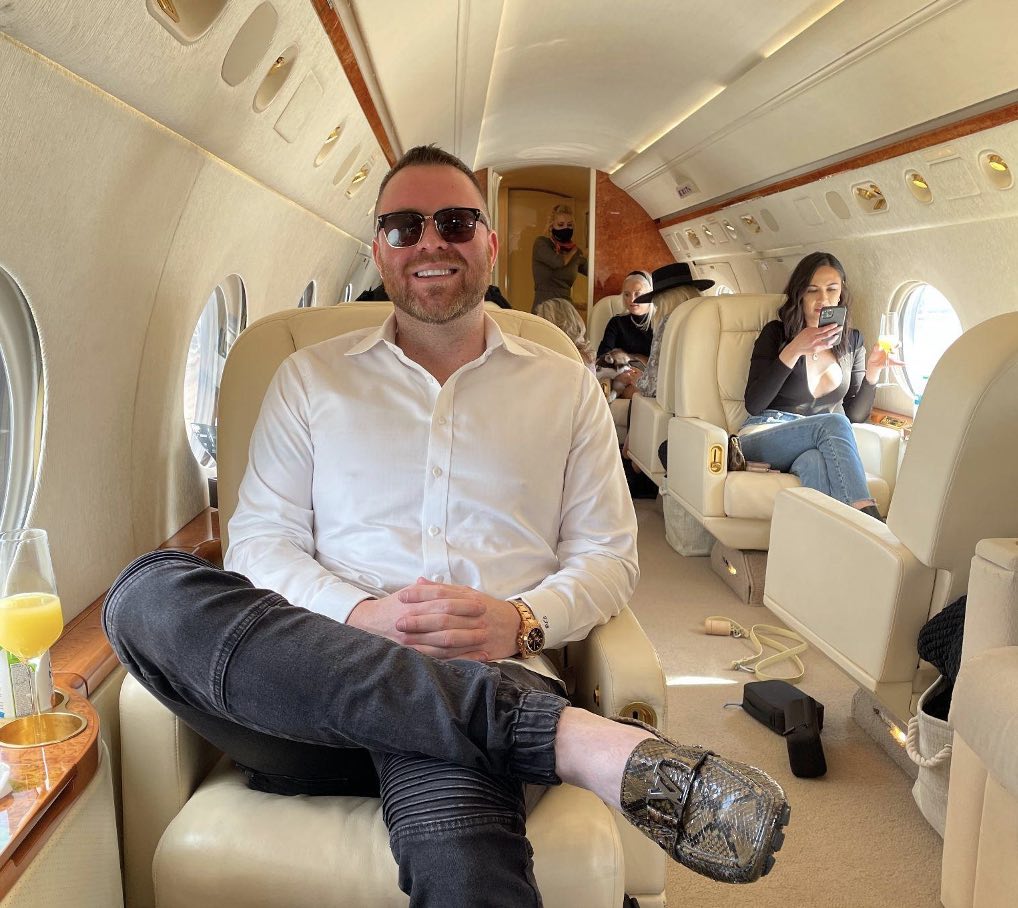 Tim Burd is the founder of the largest digital marketing community in the world and is the CEO of three privately held companies. Forbes calls him the “Godfather of Facebook Ads.” Burd founded and manages an enterprise-level advertising agency, Agency Y, with over $100M in ad budgets under management. He also travels the world, speaking at conventions and consulting Fortune 500 companies, small business owners, startups, and governments on specialty digital marketing and business expansion. Burd has a strong passion for helping others succeed. One of his enterprises is known for hosting intimate, high-level two-day masterminds with celebrity speakers, Founders Mastermind. Burd also hosts large-scale events through another enterprise, Founders and Funders, and has hosted over 30 large events with over 3,500 attendees all over the world. Mr. Burd resides in Southern California.