Who Is Sydney Johnson and Why Didn’t We Get to Know Him Sooner?

Sydney Johnson, the longtime valet to the Duke of Windsor, gets some deserved spotlight in The Crown‘s fifth season after making his (silent) first appearance in season 3. Played by Joshua Kekana in his youth and Jude Akuwudike as an older man, Johnson is featured in season 5, episode 3 as he is hired by the former King Edward VIII his wife Wallis Simpson, and later trains billionaire Mohamed Al-Fayed in royal ways of life.

Born in the Bahamas, Johnson is one of the only Black characters in The Crown—granted, the royal family is very white—and his presence felt sorely needed. When the episode concludes with his death, I was left wanting to see more of him, or wishing he was incorporated in the series earlier so viewers could connect with him more deeply. There is surely lots to cover in the decades’ long history of Queen Elizabeth II’s reign, but episodes like “Mou Mou” show us that The Crown is still compelling even when it doesn’t focus on the royals directly. After all, the monarchy doesn’t just consist of a bloodline; a diligent staff, the government, and constituents from all around the world help keep the “system” alive.

Not much is known about Johnson outside of his work with the royals and Al-Fayed, but he sure seemed like a fascinating man. Here are some key things to know.

He served the Duke of Windsor for 30 years.

Johnson began working for the Duke in 1940 when he was 16 years old, when the Duke served as governor of the Bahamas, according to The New York Times. He held the post for three decades.

His work took him from the Caribbean to the royal couple’s country home Le Bois, in Bois de Boulogne, France. While giving a tour of Le Bois, which its future tenant, Mohamed Al-Fayed would later call Villa Windsor, Johnson shared details of what life at home with the Windsors was like.

“On Christmas Day they’d always be alone, just with us, the staff and our families. The dogs would be running around getting presents, too,” he told the Times. And upon encountering a footman’s livery jacket adorned with a gold braid, he said, “I always used to wear one of these when I served at one of our big dinners.”

It seems not only the Windsors were fond of Johnson. Hugo Vickers, royal biographer and author of The Crown Dissected, told Time: “I met him at the Windsors’ house in Paris in 1989. He was a delightful man, with a lovely smile, and great human sympathy. He was clearly very fond of the Duke and Duchess and spoke of them with understanding.”

The Duke of Windsor died in 1972, but Johnson continued to work at the Windsor household. Johnson’s wife died the following year, and to make matters worse, the Duchess of Windsor wouldn’t allow him to leave work early to care for his kids. “I have four children,” Johnson told her, People reported in 1990. “Let me take care of my four children. And you take care of your four dogs.” Johnson resigned from his post, though Vicker told Time that the duchess fired him. 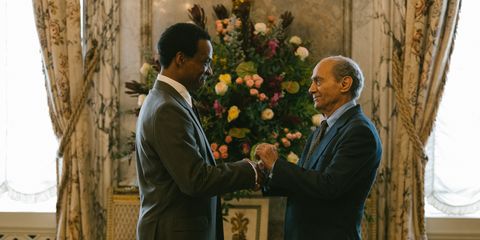 Jude Akuwudike and Salim Daw as Sydney Johnson and Mohamed Al-Fayed in The Crown.

He worked for Mohamed Al-Fayed.

In The Crown, Johnson encounters Al-Fayed when he is serving at a party at the Ritz. Daw’s Al-Fayed first discriminates against Johnson, sending him out of the party as the only Black person there, but then hires him after learning he used to work for royalty. From there, Johnson became valet to Al-Fayed, training him in royal etiquette and assisting in the renovation of “Villa Windsor,” the Duke and Duchess of Windsor’s French home, which Al-Fayed rented after their deaths.

While details of their initial meeting are unclear, it is true that the real Johnson worked as a waiter at the Ritz. (People reports the tycoon hired him in 1977.) Johnson was then assigned to Villa Windsor as Al-Fayed’s valet, to handle renovations and act as a curator given his history working at the estate.

“Sidney [sic] is a dictionary,” Al-Fayed told The New York Times in 1986. By then Johnson was 63 years old. “He’s a very cultured man. He got all these things out of boxes and safes and storage rooms, and he knows their history.” 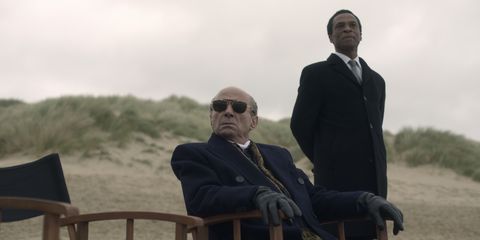 Johnson died on Jan. 17, 1990 in Paris at the age of 69. According to the Associated Press, his last public appearance was just a month prior, on Dec. 10, at a party marking Al-Fayed ‘s re-opening of Villa Windsor.

“I feel on top of the world,” Johnson said at the time. “The restoration is so authentic I expect to see the duchess stepping down the staircase asking, ‘How do I look?’”

Responding to the news, Al-Fayed said Johnson “was truly a gentlemen’s gentleman. We shall miss him very much.”