Season 5 of The Handmaid’s Tale saw a lot of big changes for our characters over the course of 10 episodes. June, hell-bent on revenge at the top of the season, takes the high ground by the end of it; Serena has her turn at being a handmaid; Aunt Lydia shows tenderness to Janine after a near-death experience; and Commander Lawrence, once June’s ally, seems harder to trust than ever.

All of these twists and turns are gearing us for the show’s sixth and final season, which is not yet in production but will—fans are hoping—give us answers to some big questions. The biggest one being: Will June finally save her daughter Hannah from Gilead?

There’s a lot to take in with the season 5 finale, so we’re breaking it all down here.

What happened with June and Luke? 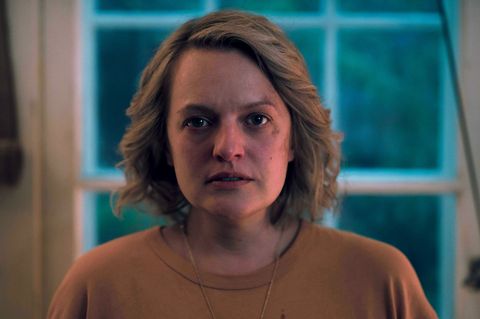 After surviving a mass shooting in episode 9, anti-refugee sentiments in Canada come to a head when June is on the street in front of her own home. After a visit from Mark Tuello, she gets chased by a driver who runs her over, crushing her arm on the pavement (that image still haunts me). Luke rushes out to the street and beats up the driver, injuring him so badly he ends up in the ICU. June, too, is rushed to the hospital. She’s unconscious and Luke is in questioning when Nick pays her a secret visit at the hospital bed. But more on that later.

Once she’s returned home, June is awoken by chatter in the middle of the night. Rita, Moira, and Luke are discussing that the man who hit June with his truck, named Mr. Thorpe, died, which means Luke essentially killed him. The tragedy puts him and his family in grave danger. He is a refugee who killed a Canadian on Canadian soil—protesters will rage and come after them. June comes up with a solution: They have to run away. Luke doesn’t want to stray further from Hannah, but June reminds him that they can’t help her if they’re dead. As they frantically pack the car to head for the airport, Mark interjects and informs them that American refugees are currently headed to Toronto and the government plans to send them West on trains. He can get June and Luke aboard.

Tuello takes Luke, June, and Nichole to the train station. Before they go, June asks Mark to tell Nick that she and Nichole are safe; he obliges. The trio shuffle through the crowd headed for the trains but when they spot the authorities on the platform, Luke hangs back. He knows that if he’s spotted, he’ll be taken away along with June and Nichole; he’d rather not sabotage his wife and her daughter’s chances of getting out safe. As June and Nichole reach the front of the line, police around them are asking other passengers if they’ve seen Luke. She calls him before boarding, and he says he’s staying behind. She vehemently protests, but Luke stands his ground. It’s almost as if he wasn’t planning to go on the train at all. Finally, June acquiesces and tells him on the phone–through tears—“Come find me.” They exchange I love yous and hang up, then Luke calls the police his way.

On the train, June is carrying Nichole, telling her wonderful things about Hawaii, their presumed destination. They hear another baby crying in the back of the car and standing there is Serena holding her infant son Noah. 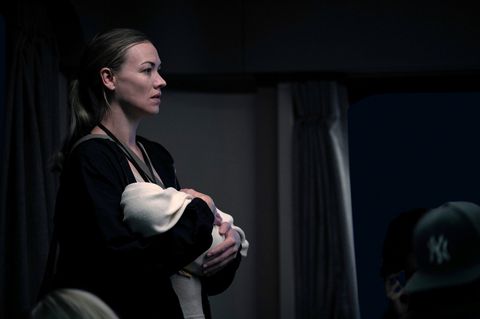 Serena doesn’t appear in episode 10 until the closing scene, when she runs into June on the train. She even asks her if she has a diaper. But how did Serena get there? In episode 9, she escaped from the Wheelers at the fertility center when she said she was just going to take a moment to feed the baby. Once left alone, she sprinted out of the building with Noah in her arms and hopped into a stranger’s car. It seems she eventually got to the train station from there. How she and June will fare on the train ride is anybody’s guess.

Where is Janine going? 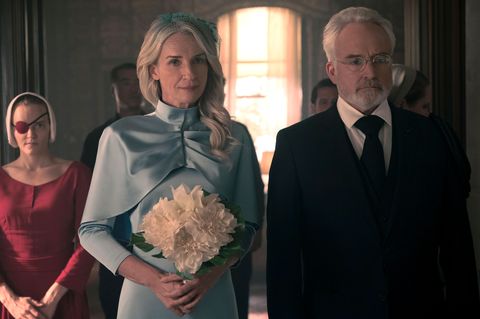 Aunt Lydia’s favoritism of Janine is becoming obvious to the other handmaids. To downplay it all, she approaches Mrs. Putnam, who is now betrothed to Commander Lawrence, to take Janine in as a handmaid (again). Mrs. Putnam has allowed Janine to visit her daughter, Angela, in the past, but she doesn’t want Janine living in the house now. Aunt Lydia is able to convince her that taking in Janine would be an example of Gilead’s rebranding and will make her look like a strong, forgiving leader.

Janine doesn’t want to be posted at the house either. But the prospect of reuniting with her daughter does the trick. They arrive at Commander Lawrence’s house amid a soiree (a bridal shower perhaps?), but Angela isn’t even there; she’s with her grandparents for the summer. Mrs. Putnam says Janine will have to “prove herself” worthy of staying in her home during a trial period. If Mrs. Putnam approves, Janine will get to stay. Janine nods and says “I understand” through gritted teeth.

At the party, a Martha tells Janine that June has been hit by a truck. She’s alive, but “they want to kill her in Toronto,” she reports. Janine is shaken. So much so that when Mrs. Putnam offers to show her to her room later and calls her a “friendly face”—and worse, “Ofjoseph”—Janine snaps. “That’s not my name. And we’re not friends,” she hisses. She adds, “I think that you are one of the worst people I have ever known. I am not your friend. I hate you, Naomi, how can you not know that?”

Clearly, Janine does not pass her trial period. Aunt Lydia tells her to beg for the position back, but Janine refuses. Before Lydia can resume another lecture, the Eyes arrive to take Janine away—on Commander Lawrence’s orders. Lydia protests but that doesn’t stop them. Janine is cuffed and muzzled and thrown into the back of a truck, her destination unknown, while Lydia is left behind seething.

What’s the deal with Nick? 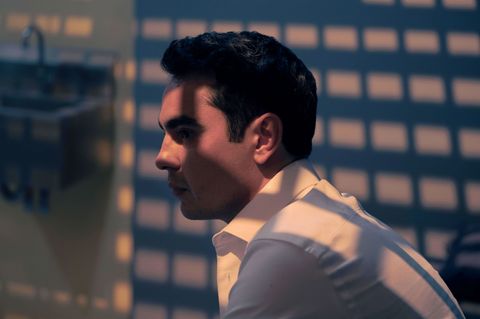 Nick meets with Mark Tuello in the night, seemingly accepting a deal for his freedom in Canada. In the last episode, he wouldn’t even listen to June’s pleas to escape; he couldn’t leave his pregnant wife behind. But it looks like he changed his mind. Mark takes him to the hospital to see June bedridden. He takes a moment to sit by her bedside then leaves without her knowing he was ever there.

Nick signs a contract for Mark confirming their deal, but makes him promise that he will keep June safe. He knows that Gilead will do whatever it takes to make her suffer. Nick puts his trust in Mark, thinking he is “nothing” to June, but Mark assures him that’s not the case.

Next, Nick storms into Commander Lawrence’s house and punches him in the face. “You could’ve killed her,” Nick tells him, referring to the truck attack on June. Commander Lawrence whines back that it wasn’t his decision. But surely, he might have something to do with it, or have known about it, right?

Nick’s wife Rose meets him and scolds him for leaving. “You say that you’re a good man but a good man wouldn’t leave his pregnant wife every time his girlfriend calls,” she says, her words burning through him. She realizes that Nick will never let go of June, no matter how much he’s tried. She declares that she doesn’t want to be with him anymore. A new chapter of his life is starting now—and it’s safe to say the same for everyone else.

Watch The Handmaid’s Tale on Hulu