On Friday, Megan Fox and Machine Gun Kelly enjoyed a lunch date in Malibu at Nobu, dressed in their definiton of casual every day wear. Fox was in a deeply cut halter crop top in a tie-dye pattern, with a black sweater over her shoulders. She wore it with over-sized black pants and carried a small black purse, accessorizing with a silver cross choker.

Machine Gun Kelley was in a black sweater covered in an orange pattern resembling shattered glass. This was over black and orange drip-patterned pants. The couple wore matching fuzzy hats, Fox’s in bright pink and MGK in black.

The couple met while filming Midnight in the Switchgrass in March of 2020 and were engaged in January of 2022. Fox was formerly married to actor Brian Austin Green, with whom she shares three children, Noah Shannon, 9, Bodhi Ransom, 8, and Journey River, 5. MGK has one child, daughter Connie Colson Baker, 13, with ex Emma Cannon.

Fox and MGK been very public about their fascination with one another, and even said they “drank each other’s blood” the day they got engaged. For Halloween this year, Fox and MGK attended the Casamigos Tequila Halloween party in Beverly Hills dressed as ‘90s-era Pamela Anderson and Tommy Lee. 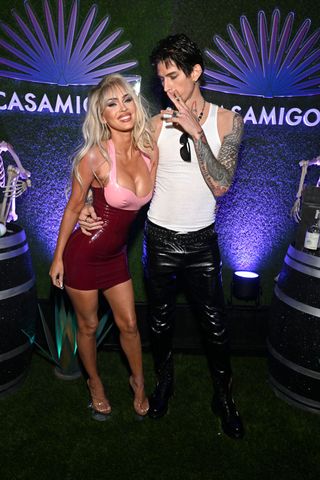 They were also spotted on the 31 of October dressed as characters from the video game The Legend of Zelda, wearing pointed ears and leather details. 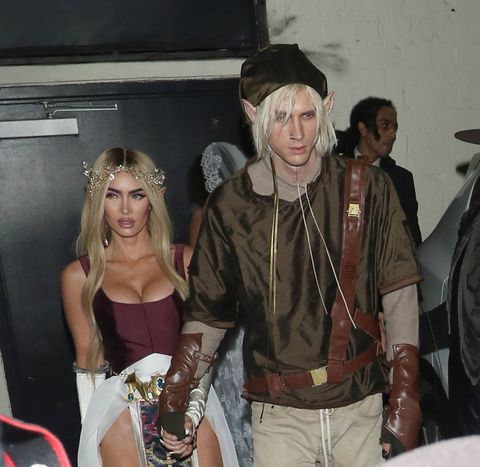 That was their most conservative costume of the weekend. Fox also posted a few photos of MGK offering her a fake communion wafer while dressed up in a priest’s dress — meanwhile, the actress was on her knees in leather lingerie while wearing a dog collar.

“On Sundays we take communion,” she wrote in the caption. These two really treat their Halloween holiday religiously.