After dressing like the flower bride from Yves Saint Laurent’s 1999 couture show, Hailey Bieber continued her designer-inspired Halloween by stepping out in a Versace vampire look at The Peppermint Club in West Hollywood last night. But what made her sexy costume all the more alluring was what her husband Justin Bieber wore beside her: He was Cookie Monster in a onesie. Truly polar opposite looks, in style and—arguably—effort: 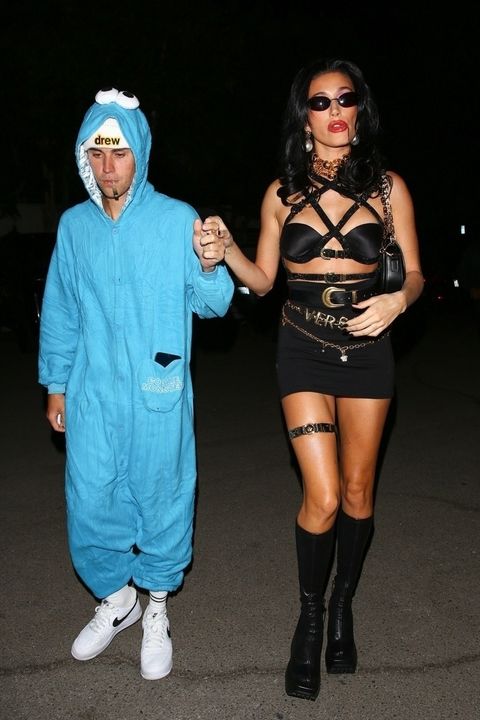 In the September issue of Harper’s Bazaar, Hailey spoke about what her and Justin’s marriage is like four years in.

“He’s still the person that I wanna be rushing back to,” she said. “I might fly somewhere and go do a job, but I can’t wait to come back and hang out. And I feel like that’s because of the effort that’s been put in on both sides. At the end of the day, like, he’s my best friend, but it still does take a lot of work to make it work. And then I know eventually, when kids come in the picture, that’s going to be a whole other season of navigating how to make that work.”

She also discussed their relationship-to-marriage timeline during her Call Her Daddy interview, released at the end of September, and confirmed there was no overlap with Justin’s relationship with Selena Gomez—or anyone else—when they first started dating again in June 2018.

“When him and I ever started hooking up or like, anything of that sort, he was not ever in a relationship ever at any point,” she said. “I would never—it’s not my character to mess with someone’s relationship. I would just never do that. I was raised better than that. I’m not interested in doing that, and I never was. I think that there are situations where you can still kind of have back and forth with someone but even that was not the situation. Like I can say, period point blank, I was never with him when he was in a relationship with anybody. That’s the end of it.”

“And I had been involved with him since I was 18,” she continued. “The timeline also that sometimes is in question of us getting together then getting engaged and him having been spending time with his ex before that, this is so crazy. I’ve literally never talked about this ever. I understand, again, how it looks from the outside. There’s a lot of perception there. But that was a situation where I know for a fact that it was the right thing for them to close that door. They were not in a relationship at that time, but there’s a very long history there, and it’s not my relationship. It has nothing to do with me, so I respect that a lot.”