Welcome to Shelf Life, ELLE.com’s books column, in which authors share their most memorable reads. Whether you’re on the hunt for a book to console you, move you profoundly, or make you laugh, consider a recommendation from the writers in our series, who, like you (since you’re here), love books. Perhaps one of their favorite titles will become one of yours, too. 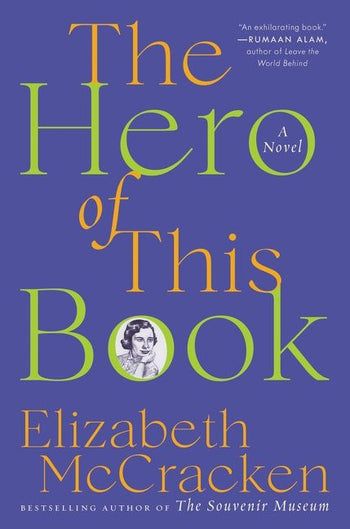 Elizabeth McCracken’s eighth book, The Hero of This Book (Ecco) follows a writer reflecting on her late mother’s life and on their relationship as she wanders through London. Details may blur the line between fact and fiction, but it is a novel.

The Boston-born, Austin-based author has also written a memoir, short story collections (two longlisted for the National Book Award), and National Book Award finalist The Giant’s House, which is being adapted for film by Nick Hornby and directed by Andy Serkis. A graduate of and instructor at Iowa Writers’ Workshop, she is the James Michener Chair in Fiction at the University of Texas, Austin and the recipient of grants and fellowships from the Guggenheim Foundation and the National Endowment for the Arts among others.

She played candlepin bowling in a league growing up; thought she might be a poet and studied playwriting with Derek Walcott; holds an MLIS (master’s in library information science) and was a public librarian; once won $500 worth of books from Prairie Lights as a grad student in Iowa City; was quoted in freewillastrology.com; Tweets swimming reports from Barton Springs pool; carries an unsmart phone so as not to be distracted by the internet; has lived in France; and read Anna Karenina in 16 hours.

Likes: hotel rooms, ventriloquism, Kaweco fountain pens, driving in the UK, puppets, the Isabella Stewart Gardner Museum, and semi-colons. Dislikes: elves, having her picture taken, occasional backstrokers. Immerse yourself in one of her book recs.

…made me weep uncontrollably:

Our Andromeda by Brenda Shaughnessy. Full disclosure: I have never wept uncontrollably at a book, or at a movie, or any work of art. I am hardhearted. I never cry at things are simply sad; I cry at beauty and strangeness and the human willingness to look for meaning—not transcendence, but meaning—at difficult times. Brenda Shaughnessy’s Our Andromeda, a book of poems, always moves me to tears.

….I read in one sitting, it was that good:

I read Brit Bennett’s The Vanishing Half all at once. It was the first book I read during the early days of the pandemic that showed me a world so vivid, with characters so entirely real, I fell into it and out of my dull life.

…helped me through a breakup/loss:

The Art of Losing: Poems of Grief and Healing, an anthology edited by Kevin Young. Poetry is what I require if I’m unmoored.

Before I read the short stories of Grace Paley (first in Enormous Changes at the Last Minute, and then in her Collected Stories, I might have thought a short story could do only one or two things, and not—as Paley’s stories do—move a reader to tears or laughter, describe the way people live and talk, be surreal and true-to-life at the same time, and, above all, ask, quite literally, how we are to live in the world.

…I recommend over and over:

…I’d give to a new graduate:

Lynda Barry’s What It Is. Useful for anyone who wants to use art—writing, drawing, the pen across the page—to understand life, and then to make things.

…made me laugh out loud:

Paul Lisicky’s Later: My Life At The Edge of the World is so good and full of lust and intelligence and understanding of what it means to grieve and find yourself at the same time. It also includes a section about the author being dragooned into a parade while wearing a large hat shaped like a soft-serve ice cream cone that makes me laugh just thinking about it.

Paul Takes the Form of a Mortal Girl by Andrea Lawlor would make a great series: funny, humane, episodic, full of event, and also sex, and also joy and complexity.

Elizabeth Crane’s This Story Will Change, a memoir by a wonderful fiction writer.

The Book of Goose by Yiyun Lee, which is every bit as strange and beautiful inside, a page turner about female friendship and the nature of authorship.

…has the best title:

My answer for this has held steady for years: David Bowman’s Let the Dog Drive.

…features a character I love to hate:

…is a master class on dialogue:

Richard Price is criminally underrated as a novelist. Lush Life is my favorite of his books, but they’re all full of funny, frightening, fantastic dialogue.

…has the greatest ending:

Stephen Kuusisto’s Planet of the Blind is a beautiful book, and the end of it is gorgeous and unforgettable, but what hit me like a gong nearly 25 years ago when I first read it, and still resounds in my head, is the ending of the acknowledgments: “My greatest debt of gratitude is to the Burkett family of Fairfax, Virginia. Bill, Reba, Bill Jr. and his sister Anne Marie raised my guide dog. And then they let her go.”

Betsey Trotwood from David Copperfield is one of my favorite characters in all of fiction. I’d like to visit her house (though Dickens is a brilliant writer of interiors, among other things, so in some ways I feel I have).

Joseph Mitchell’s Up at the Old Hotel never fails me. He was a New Yorker writer with a fondness for eccentrics and oddballs. Me, too.

I have an imaginary resume of things I’ve done that have touched on the literary world with no effort to myself. My first entry and perhaps favorite: I was the first person to ever read Bel Canto by Ann Patchett. I read it in manuscript while sitting up at a bar in Cambridge, Massachusetts. All of her books are astonishing, of course, but I still remember the feeling of being entirely pinned to my barstool, not knowing what would come next, or how she did it.

…that holds the recipe to a favorite dish:

My mother loved the Mary Poppins books so much it’s impossible for me to unwind my own love of them from hers: I love them because she loved them and as she would say, she was always right. She gave me a copy of Mary Poppins in the Kitchen: A Cookery Book with a Story. I cooked its very English recipes all the time: Zodiac cake (chocolate, and decorated with stars), roast chicken. But my favorite recipe was for baked custard, because my mother liked that, too. Sweet, and full of protein—my mother was a great champion of protein—nursery food, but magic, too, the way it set in the oven.

Bonus question: If I could live in any library or bookstore in the world, it would be:

The Boston Public Library, with its dioramas and murals. Books will sustain me 98% of the time, but sometimes I require a diorama.

Riza Cruz is an editor and writer based in New York.