Gisele Bündchen gave a rare hint about her headspace amid media reports that she has hired a divorce lawyer and may be splitting from her husband of 13 years Tom Brady. Bündchen left a prayer emoji comment and liked a post from life coach Jay Shetty detailing how relationships with inconsistent partners do not work.

“You can’t be in a committed relationship with someone who is inconsistent with you. Read that again,” the post read. In caption, Shetty added, “Love is a daily effort. Some days it may come easier than others and that’s OK, but what should always stay consistent is the respect and admiration you have for your partner’s values and goals 🙏⁠” 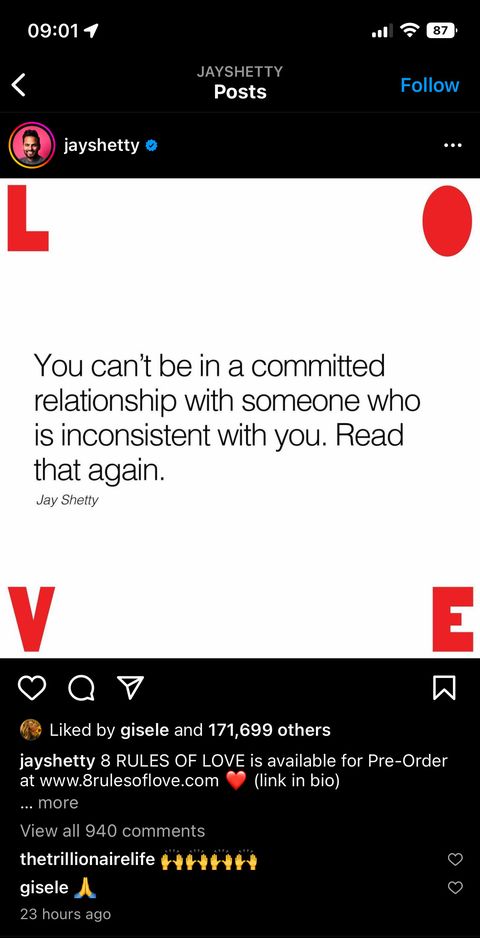 Bündchen’s move comes after People reported last week that the model hired a divorce lawyer after months of “tension” between her and Brady. A source added that Bündchen was not pleased with Brady unretiring from football and rejoining the Buccaneers. “Going back to Tampa after the retirement put a strain on the personal side of his life,” the source said. “Gisele is frustrated and sick of his career coming before their family, who has always supported him.”

“They decided together that [Brady] would retire, and then he decided by himself that he’d come back,” the source continued. “She said they’d talk about it more, but then he came back anyway before they had really talked it all through. She’s a very ‘pros vs cons’ person, and she sees very few pros to him playing anymore.”

Bündchen spoke to ELLE in our October issue about how she believes she has done her part to support Brady in his football career and take care of their family. The couple have two children together, 12-year-old Benjamin and 9-year-old Vivian, along with Brady’s 15-year-old son John from his previous relationship with Bridget Moynahan.

She noted that Brady has to make his football career choices himself. “Obviously, I have my concerns—this is a very violent sport, and I have my children and I would like him to be more present,” she said. “I have definitely had those conversations with him over and over again. But ultimately, I feel that everybody has to make a decision that works for [them]. He needs to follow his joy, too.”

But she is no longer putting her own dreams aside. “I’ve done my part, which is [to] be there for [Tom],” she said. “I moved to Boston, and I focused on creating a cocoon and a loving environment for my children to grow up in and to be there supporting him and his dreams. Seeing my children succeed and become the beautiful little humans that they are, seeing him succeed, and being fulfilled in his career—it makes me happy. At this point in my life, I feel like I’ve done a good job on that.”

Now, it’s time to prioritize herself, too. “I have a huge list of things that I have to do, that I want to do,” she said. “At 42, I feel more connected with my purpose.”