Is The Midnight Club on Netflix Based on a True Story?

Netflix has dropped its terrifying new show The Midnight Club just in time for Halloween. Co-created by Mike Flanagan of The Haunting of Hill House and Midnight Mass fame, the new series follows a group of young adults with terminal cancer who decide to live out their final days at Brightcliffe Hospice.

Every night, the gang meets in the library for The Midnight Club, which is a chance to tell each other scary stories. The teens make a pact with one another: that whoever dies first will attempt to send a message from the afterlife, in order to keep hope alive for all of those left behind. Meanwhile, new patient Ilonka is intent on discovering the secrets hidden in the walls of Brightcliffe, including its magical, or rather cult-like, history.

Fans of the series are probably wondering whether the show is completely fictional, or if The Midnight Club is based on a true story. Here’s what you need to know about Netflix’s new horror-infused teen drama.

Is The Midnight Club based on a true story?

The Midnight Club is based on the book of the same name by the author Christopher Pike. Meanwhile, the stories the characters tell each night are all adapted from the works of Pike, a prolific writer of books for young adults. However, that doesn’t mean that the idea for The Midnight Club isn’t based on something real.

As reported by Vanity Fair, the main character Ilonka (portrayed by Iman Benson) is, in fact, based on a real person, who was responsible for giving Pike the idea for The Midnight Club. When this particular teenager was diagnosed with terminal cancer in the early ’90s, her parents asked if Pike would meet with her as she was a huge fan. Pike began writing letters and speaking to her on the phone, which is how he learned about the tradition that took place at her hospital every night.

Rather than telling scary stories, the group of young patients would meet each night for a book club, where they would often discuss Pike’s novels. From there, Pike came up with The Midnight Club. Sadly, Pike’s inspiration didn’t live to see the finished product, but the book remains a tribute to the young patient that inspired him. So although The Midnight Club isn’t exactly a true story, it’s grounded in reality, and inspired by a young fan that impacted Pike’s stories in a huge way. 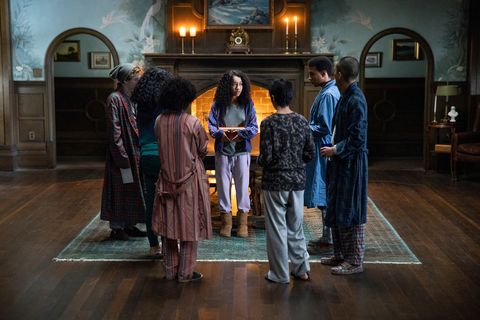 Is Brightcliffe Hospice a real place?

The setting itself is undoubtedly a crucial part of The Midnight Club, filled with more mysteries than could be explored in just one season. The young adults who decide to move into Brightcliffe Hospice (known as Rotterdam Home in the novel) are choosing to live out their final days on their own terms. However, Ilonka arrives at Brightcliffe believing that the building can help cure her cancer. After conducting some online research and reading about a previous patient that was seemingly cured after a stay in the facility, Ilonka decides that she will leave the hospice in remission.

Ilonka’s hopes seem to be confirmed when strange things start happening in and around Brightcliffe. From unusual encounters with strangers in the surrounding woods to sinister hidden rooms concealing rituals, Ilonka quickly becomes convinced that Brightcliffe might have the healing properties she’s read about.

The setting also lends itself to the sinister, with hints of the occult and ghosts roaming the halls at nights. Whether or not the ghosts are really there or figments of the imagination conjured by strong painkillers is always unclear. “The hospice has a very colorful history,” The Midnight Club‘s co-creator, Mike Flanagan, told Vanity Fair. “There’s a rumor … about a living shadow that prowls the halls of Brightcliffe. Some of the kids speculate that it might be death itself. And some of the kids, especially toward the end of their lives, talk about this thing, getting closer and closer to them.”

As for whether or not Brightcliffe is a real place, unfortunately the answer is no. The series was largely filmed in Vancouver in British Columbia, Canada, with shooting locations including Burnaby and Ladner Village in Delta, per Distractify. It’s currently unclear where the house that doubles as Brightcliffe Hospice is located, but its unusual exterior creates the perfect visual for a hospice with potentially magical properties.

Much of The Midnight Club invokes the supernatural and the unbelievable. However, the story’s origins in real-life make the spooky series even more fascinating.