Taylor Swift used the MTV VMAs stage to announce her next album Midnights and Republic Records’ VMAs after party at New York City’s Fleur Room to showcase the first look from its style era. Swift stepped out in a navy, star-adorned Moschino slip dress. She wore her blonde hair down in loose waves and accessorized with a shaggy white wrap and silver platform heels. 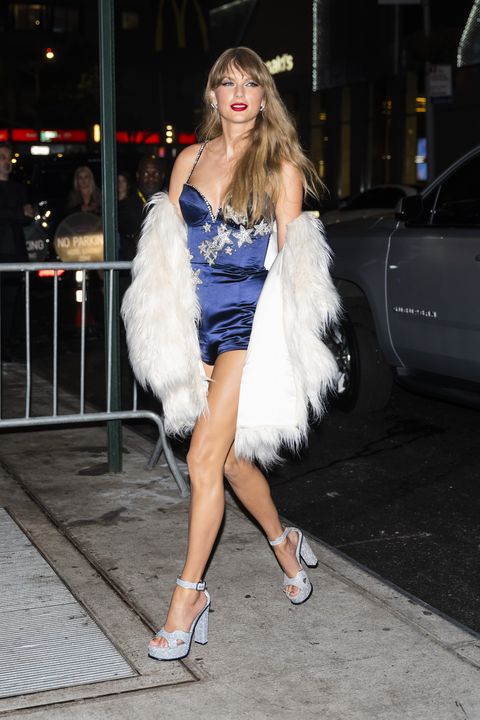 Swift announced the first details on Midnights on her Instagram at midnight, of course. In addition to revealing the project would be 13 tracks long and out on October 21, Swift touched on the theme the music would be exploring. She also shared the album art, featuring the same sort of blue she wore in her after party look.

She wrote of the music itself:

We lie awake in love and in fear, in turmoil and in tears. We stare at walls and drink until they speak back. We twist in our self-made ages and pray that we aren’t—right this minute—about to make some fateful life-altering mistake.

This is a collection of music written in the middle of the night, a journey through terrors and sweet dreams. The floors we pace and the demons we face. For all of us who have tossed and turned and decided to keep the lanterns lit and go searching—hoping that just maybe, when the clock strikes twelve … we’ll meet ourselves.

Midnights, the stories of 13 sleepless nights scattered throughout my life, will be out October 21. Meet me at midnight.

House of the Dragon Episode 6 Recap: Fire and Blood, Literally